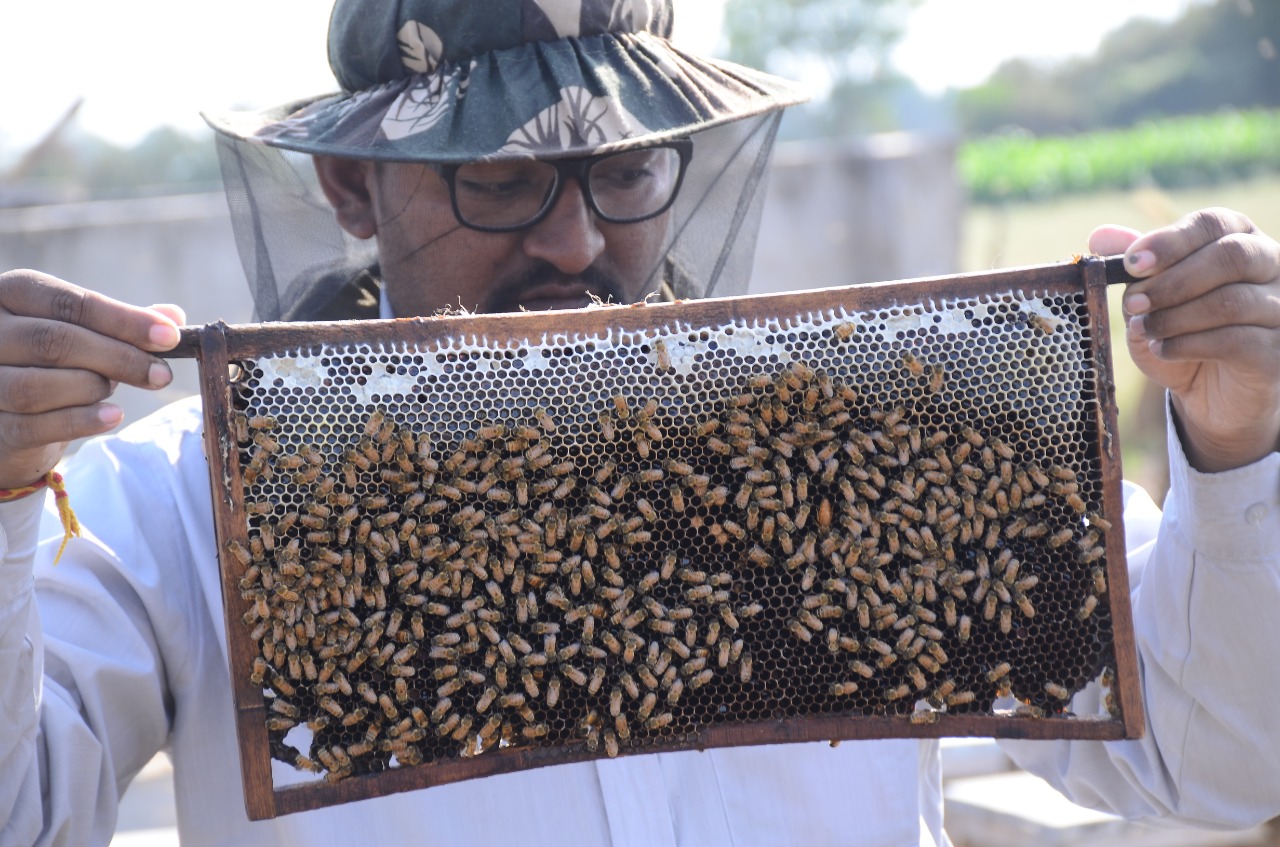 • "WHY DOES DARSHAN BHALARA PRODUCE HONEY LEAVING THE MOST LUCRATIVE JOB?"

• "A YOUTH FROM SAURASHTRA PREPARES THE BEST HONEY IN OUR COUNTRY."

• "THE BRANDED HONEY AVAILABLE IN THE MARKET MAY SPOIL YOUR HEALTH!" 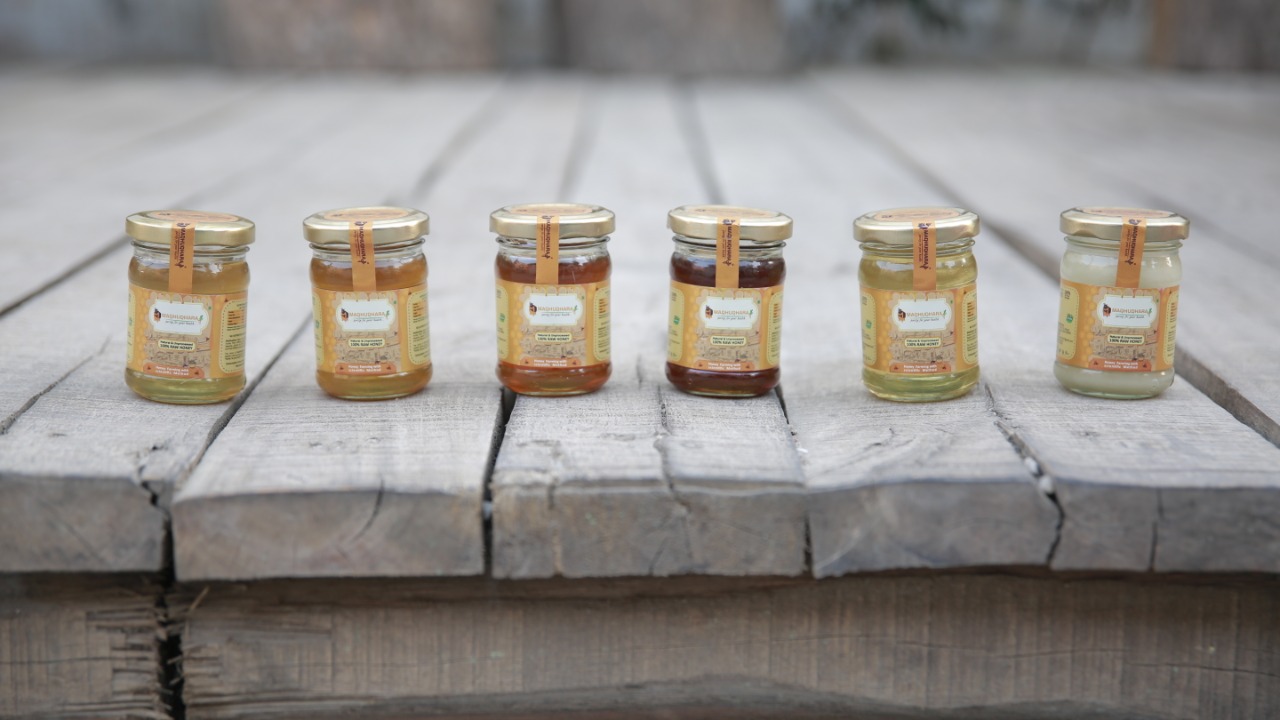 Hereinabove, there are four jars in one of the photographs. Observe the colour of each one. It is black, white, red and brown. Can you tell which one contains pure honey from among these jars? Well, the honey contained in all the jars is 100 % pure one! You might have observed that the colour of the honey in the bottom jar is black. It is made from the East Indian rosewood. It is collected by the bees visiting flowers of the rosewood tree. The next jar contains milk-like honey, is made by the bees from the cashew tree flowers, the brown colour honey is pollinated from ajwain (bishop's seeds). The jar at the top contains red coloured honey. It is produced from jujube (ziziphus jujuba). All the jars contain pure honey, however, each one has different attributes. Their tastes are also separate. Ajwain honey has sweet but little bitter taste. Yet it is the best honey for our health. Cashew honey is full of energy. All the types of honey is produced by the young person Darshan Bhalara from village Kharedi of the Kalawad Division of Jamnagar District. (Mobile:+91-9662166770). 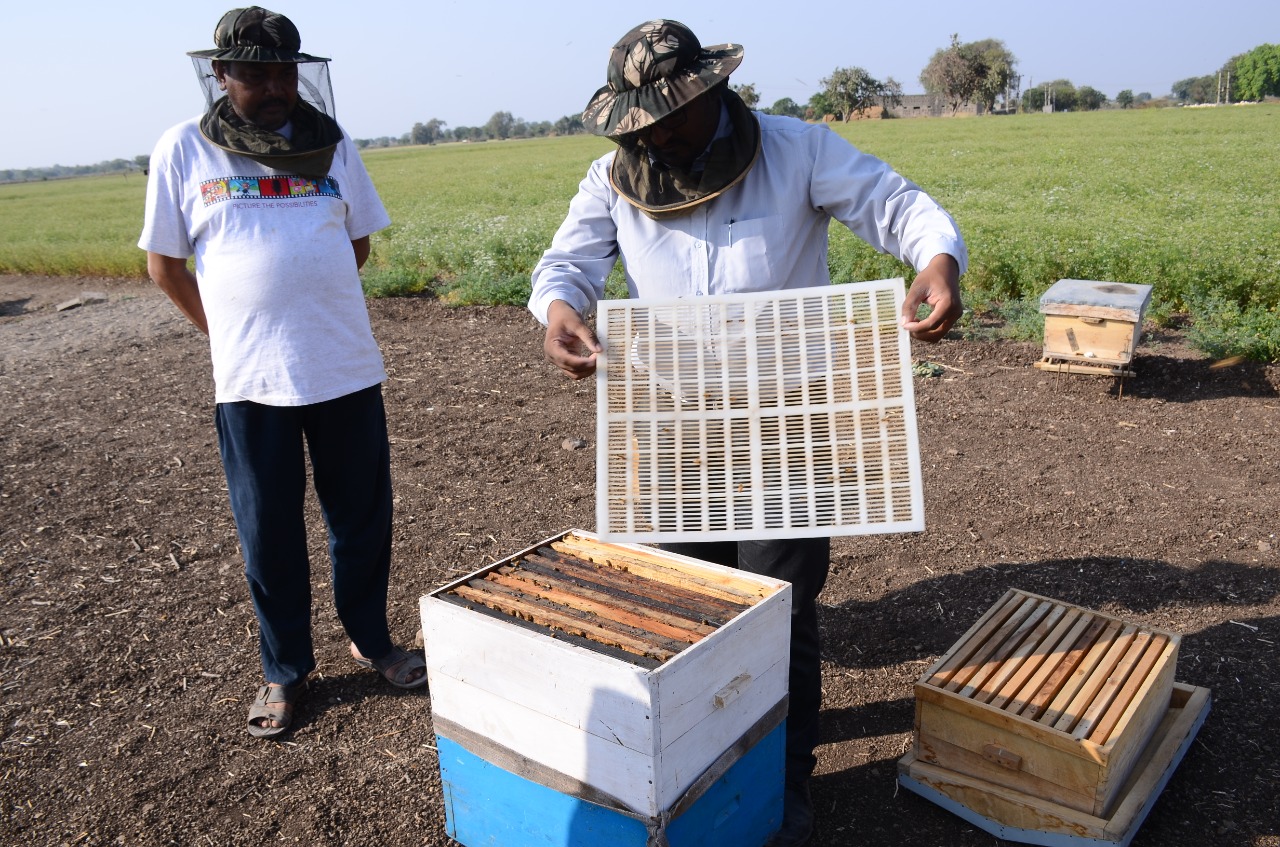 It would be better to consider him as a honey-lover man or health-lover man than as a honey-producer. After getting MBA degree, he had a good employment yielding Rs.40,000/- p.m. He owns 36 acres of fertile and irrigated land. When the Prime Minister Modi had talked about the value addition in the agricultural sector in his speech in 2014, Darshanbhai resigned from his lucrative job and decided to launch a kind of business which may help him to improve health of people at large. He put honey boxes in his ajwine field. Since then, he never looked back. At present, he gets 900 boxes for honey from all over India. He gets anise's (fennel seeds') honey from Halvad area, Bishop seeds (ajawain) honey from Saurashtra, Lichi (lichee), rosewood and jujuba honey from Uttaranchal and northern area. 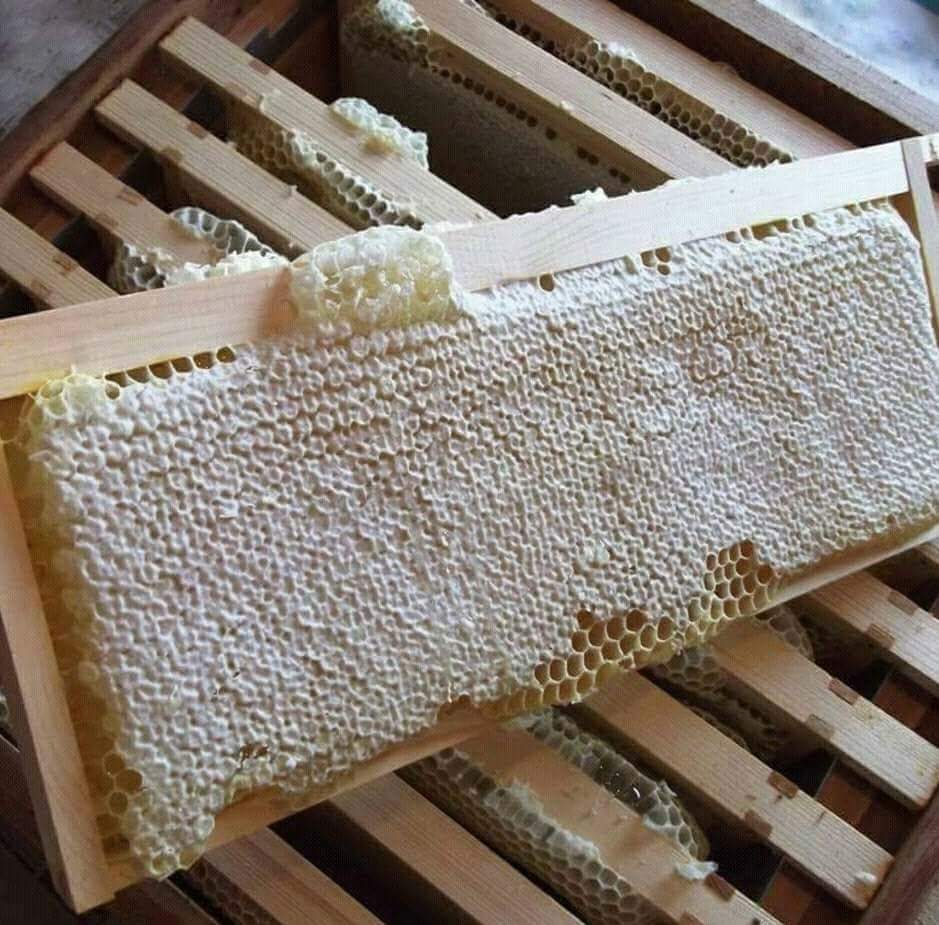 A question commonly comes to mind that many types of branded honey is available there in the market, at the same time, does the honey of Bhalara have any speciality? Yes, it is very special. It doesn't contain even one percent more moisture than the prescribed international standard. Because, he oozes out honey only when it is completely ripened. Well, what is this completely ripened honey? When a bee finishes her process to make honey, she seals her honeycomb with wax. When this incident takes place, it means that the honey inside the honeycomb is completely ripened. Honey obtained then from such a honeycomb only is real one. Due to this process, the weight of the honey is reduced too much. If the honey is oozed unripened, it weighs more, its production is increased too much, likewise it increases the profit margin also. But this type of honey has utterly less structure and taste. If one needs to have pure honey, its cost shoots up. Here in India, the maximum price of honey is Rs.150/- per kg. in wholesale market! The giant companies get honey from the producers at this rate only. And, thereafter, they fix their labels of their brands and sell it in the market. Few established companies among them mix up fruit syrups and corn syrups and also pesticides. This type of honey is like the milk of a dairy. As the milk of sheep, goats, jersey cows, buffaloes are mixed up, likewise, all the types of honey is mixed up. It may include babul and mustard honey too. The companies may not have idea of the different types of honey's origins even. Bhalara's honey is 100 % ripened and it is RAW (pure) in its real sense. No chemical process is used in making such pure honey. Therefore, it costs a little more. No doubt, all the branded honey available in the market is not ripened and is processed too. Another important point is: When the pure honey is obtained from the indigenous boxes (hives), in that case too, there are chances that it may include larva, eggs of a bee with many other impurities. Darshan Bhalara mostly uses the boxes according to the New Zealand method; there are separate compartments to collect honey and to lay eggs for bees in such boxes! Here the question of mixing honey with any impurities or eggs doesn't arise at all. This system makes his honey unique, healthy and pure comparing to the honey available in the Indian markets. 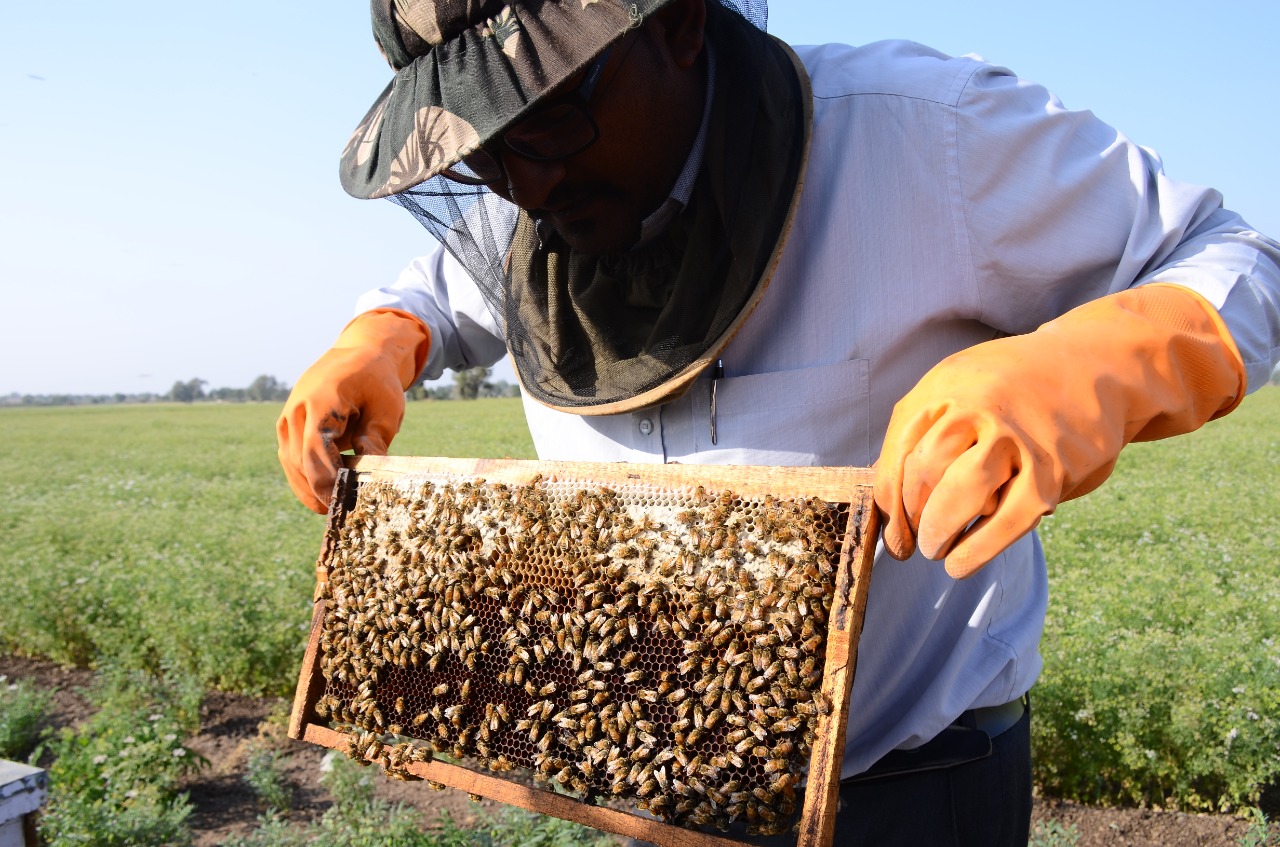 Darshan Bhalara has made up his mind to provide the pure honey. Though, he does not produce his pure honey on very large scale, his devotion and honesty towards his work is great. He reasonably believes that the packing of the honey should be done in a glass bottle only. Therefore, he brings the special bottles from Malaysia, and only after keeping thermocol in it, he proceeds to supply his honey. His honey has only one Brand name: MADHUDHARA. No distributor, no stockists. He himself manages delivery process! However, it is sure that once a person who tastes his Madhudhara honey, will never turn to another brand's honey! Like his pure honey, his Gir Cows' Ghee (clarified butter) is also the best for our health. He has good number of Gir cows. He feeds them only with green grass and coconut oil-cakes. He milks them only in a brass vessel. He uses only earthen pots for mixing curds. Only wooden churning rod is used for further process. When the butter is formed, the pot is tied with a piece of cloth and kept it under the neem tree, planted surrounding his orchard (vadi). At the end, to prepare Ghee the earthen vessel is kept on large local fireplace. This is the original Ayurvedic system. When done with he gets daily around 100 ltr. of buttermilk. But he never sells it. Any needy person can have it free of cost. When he started to deal in Ghee, he had given a promise to his grandmother that he will never sell buttermilk. He has been keeping his promise, with pleasure, even today. In the present time,

A young son of a farmer doesn't want to farm an area of land, farmers have more interest in loan-waiver and Government's aid. They go on crying but don't want to go for value addition. They don't want to think that there are many more things (crops) other than groundnut and cotton plants. Darshan Bhalara is the ideal for countless such youths. If farmers honestly adopt agriculture technologies in farming and in cow rearing with the serious thought about value addition, they can find long queues of genuine, wealthy upper class buyers of their products irrespective of the price.